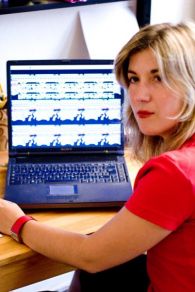 Networked Disruption
Rethinking Oppositions in Art, Hacktivism and the Business of Social Networking

In connection with the submission of her PhD dissertation “Networked Disruption. Rethinking oppositions in art, hacktivism and the business of social networking” to the Faculty of Arts at Aarhus University for the award of a PhD degree in Information and Media Studies, Tatiana Bazzichelli will publicly defend her research in an open forum, 14-17 on Monday December 5, 2011, in Det lille Auditorium, Incuba Science Park, Åbogade 15, Aarhus University, Denmark.

The objective of this research is to rethink the meaning of oppositional practices in art, hacktivism and the business of social networking. By identifying the emerging contradictions within the current economical and political framework of Web 2.0, hacker and artistic practices are analysed through business instead of in opposition to it. Shedding light on the mutual interferences between networking participation and disruptive business innovation, this research explores the current transformation in political and technological criticism. After the emergence of Web 2.0, the critical framework of art and hacktivism has shifted from developing strategies of opposition to embarking on the art of disruption. Disruption becomes a two-way strategy in networking contexts, a practice to generate criticism, and a methodology to create business innovation.

Connecting together disruptive practices of networked art and hacking in California and in Europe, the author proposes a constellation of social networking projects that challenge the notion of power and hegemony, such as mail art, Neoism, The Church of the SubGenius, Luther Blissett, Anonymous, Anna Adamolo, Les Liens Invisibles, the Telekommunisten collective, The San Francisco Suicide Club, The Cacophony Society, the early Burning Man Festival, the NoiseBridge hackerspace, and many others.

After the PhD degree there will be a reception in room 229, Nygaard Building, Finlandsgade 21, 8200 Aarhus N.