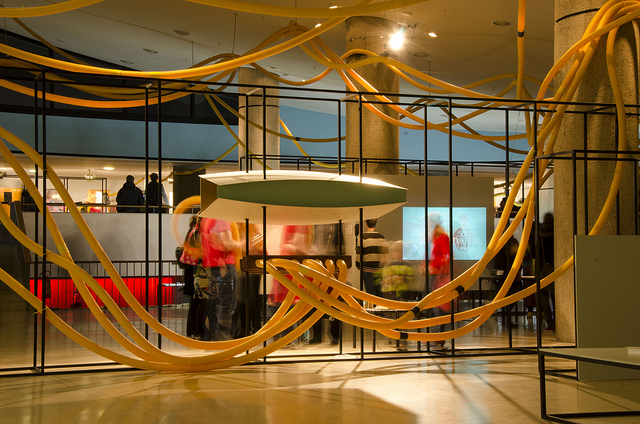 Since September 2011, I have been curating the reSource transmediale culture berlin, a project of transmediale that happens throughout the year in the city of Berlin, developing ongoing activities with decisive touchdowns at each festival. It is a networking project based on the inter-connection of genres & practices, developed in cooperation with the reSource partners: CTM/Disk, Kunstraum Kreuzberg/Bethanien and the Post-Media Lab/Leuphana University of Lüneburg. Before transmediale 2013 BWPWAP I planned to create a conceptual link from the events organised in May and in August, to various festival activities, which constituted a further development of those.

The event reSource 002: Out of Place, Out of Time, held last August at Kunstraum Kreuzberg/Bethanien was the occasion to launch three major installation projects, which have been developed for the following six months, to be finally realized and presented at transmediale festival 2013: OCTO P7C-1, which featured PNEUMAtic circUS, ReFunct Media #5 and Composting the City / Composting the Net.

–       OCTO P7C-1, the Official Miscommunication Platform of transmediale 2013, which resulted from a joint collaboration between the reSource transmedial culture berlin/transmediale, the Berlin-based collective Telekommunisten, the raumlabor berlin group, and a network of around 100 international mail artists. It was a living metaphor of a social network made from a structure of pneumatic tubes connecting a central station to other eight stations in various location of the HKW, allowing the visitors of the festival, the artists, and the public, to exchange messages contained in pneumatic capsules. The first OCTO prototype system provided vacuum-speed, physical, capsule-packet communications, enhancing the social experience and creativity of the transmediale visiting public. The OCTO prototype system was installed throughout the Haus der Kulturen der Welt, connecting all the event spaces, integrating thematic activities, conferences, performances and workshops.

–       The second large installation presented and realized at transmediale 2013 in the context of the reSource was ReFunct Media #5, a circuit-bending chain of elements made of obsolete technologies, an ongoing collective project whose development began in August 2012, generated from a Minitel hacking workshop: 3615 Circuit Bending, directed by Benjamin Gaulon and Karl Klomp. ReFunct Media #5 played with the limits of planned obsolescence and the short lifespan of digital technologies. Rather than merely dealing with e-waste, and sustainable design strategies, it aimed to re-contextualize second-hand hardware or cheap toys, and to transform commercial and mass-produced technology (such as Minitels and TVs) into unique devices, with potential for new and original means of expression or communication. A collaborative project initiated by Benjamin Gaulon with Karl Klomp, Tom Verbruggen, Gijs Gieskes. Special guests for the transmediale edition were: Phillip Stearns and Peter Edwards. The project also included contributions from ReFunct Media #4 by Niklas Roy.

–       The third project was Composting the City / Composting the Net, an art installation project by Shu Lea Cheang, processing discarded food scraps and the immaterial junk of net data. While Composting the City investigated urban food waste management systems, Composting the Net sourced net cultures’ accumulated data. The Berlin edition of Composting the City was launched at reSource 002: Out of Place, Out of Time in August 2012.  Twelve vermicomposting units made out of bread crates were installed outside of the Kunstraum Kreuzberg/Bethanien. Borrowing an “ADOPT A HIGHWAY” mode of highway maintenance, the initiative called for Berliners to  “ADOPT A COMPOSTER.” Twelve “foster parents” signed up to undertake the six-month task of feeding the worms and mini-blogging their routines and thoughts on food consumption. The project culminated with a live performance at transmediale 2013 with Shu Lea Cheang, Martin Howse, Ayumi Matsuzaka & Tikul, who worked with the mature compost applying the composting process both to the material (bodily waste, food scraps, papers, documents) and the immaterial (info-data, net archives), while rendering massive data into data noise.

The ReFunct Media #5 project was also liked to other festival activities: the project was launched with a performance during the opening of the festival, and two related workshops on e-waste and on the building of a light drone synthesizer followed.

Finally, the critical reflection on network and queer practices operated by the reSource during the development of the year programme, resulted into the realisation of various panels and activities part of the BWPWAP Conference, especially as part of the Network thread (i.e. the OCTO installation related events) and the Desire thread (i.e. the performance “Eier Haben” by Diane Torr, and the BWPWAP Desire Keynote with Sandy Stone).

The reSource yearly activity brought also results into the workshop programme, for example linking the launch of the I-Phone Live project by Johannes P Osterhoff at the reSource 002 event in August, with Osterhoff’s workshop “Mobile Device Forensics for Artists” held during the festival.

After transmediale 2013, the reSource transmedial culture berlin will generate a distributed program of debates and presentations taking place in various locations in the city. The aim is to encourage further sharing and exchange on current trans-genre practices of art, hacking and networking, not only to present emerging artistic projects in the city, but also to generate collective reflection into local culture politics.

← Panel: “The Aesthetics of Disruptive Business”
Networked Disruption: The Book →