Some notes extracted from a paper written for the Conference “Interweaving Technologies. The Aesthetics of Digital Urban Living”, Aarhus, Denmark, April 22nd, 2010.

In the last half of the twentieth century Avant-garde art practices from Fluxus to mail art promised the creation of collaborative art and the production of new models of sharing knowledge. Today, techniques of networking developed in grassroots communities have inspired the structure of Web 2.0 platforms and have been used as a model to expand the markets of business enterprises.

The principal success of a Web 2.0 company or networking enterprise comes from the ability of enabling communities, providing shared communication tools and folksonomies. In this paper, I aim to advance upon earlier studies on networked art using a cross-national design, refusing the widely accepted idea that networked art is mainly technologically determined. Furthermore, I will present a few considerations that connect early experiments of networked art with the establishment of social networking platforms.

In the artistic context of the past twenty years, networking art was referring to the ability of creating a map of connections in progress, and nets of relations among individuals. Since the 80s, platforms of networking have been an important tool for sharing knowledge and experience. According to some artists and theoreticians, networked culture, developed during the last half of the twentieth century, gave rise to a gift-exchange community as an alternative economy and social system (Welch, 1995; Baroni, 1997; Saper, 2001) [1] and this model of communication allowed for the ‘exchange’ of spontaneous gifts.

The concepts of openness and Do-It-Yourself, were the starting point for the development of networked art, such as mail art, but also of punk culture and hacker ethic. The art of networking was based on the figure of the artist as networker: a creator of sharing platforms and of contexts for connecting and exchanging. It was not based on objects, nor solely on digital or analogical instruments, but on the relationships and processes in progress between individuals. Individuals who could in turn create other contexts of sharing. The same Do It Yourself hands-on practice was used to describe subsequent phenomena of networking and hacktivism; from Neoism to Plagiarism, up until the 1990s, when the network dynamics are affirmed on a broader level through the use of computers and the Internet. The ‘hacktivist attitude’ referred to an acknowledgement of the net as a political space, with the possibility of decentralized, autonomous and grassroots participation.

Today we are facing a progressive commercialization of contexts of software development and sharing, which want to appear open and progressive (very emblematic is Google’s motto ‘Don’t be evil’), but which are indeed transforming the meaning of communities and networking, and the battle for information rights, placing it into the boundaries of the marketplace. An interesting example of the transformation from networked art as a collective and sharing practice to the creation of economically oriented communities is given by the art of crowdsourcing of Aaron Koblin. The artist uses the Amazon Mechanical Turk to create works of art, which result from a combination of tasks, performed by a group of people, gathered through an open call asking for contributions. The contributors are paid a specific amount of money after delivering their work. Koblin used the strategy of crowdsourcing to create works such as Bicycle Built for Two Thousand, Ten Thousand Cents and The Sheep Market (see images below). [2]

But, even if these works involved many people who perform the single tasks, the members of the group are not in connection with each other. What we have at the end of the process is an aesthetic representation of the collectivity, but the collective doesn’t exist per se. If we go back thirty years to the practice of mail art, it involved individuals linked by belonging to a non-formalized network of common interests, which resulted in exchanging postcards, handmade stamps, rubber stamps, envelops and many other creative objects shared though the postal network. In this case, the network was open to everyone, not economically oriented, and the artists participated to the call just for fun or for pleasure of sharing interests.

The Sheep Market by Aaron Koblin

If we proceed following a comparative method based on ethnographic investigation of some cases, this above mentioned shift from networking art as grassroots practice to social networking as business model appears evident. A very clear example is the Burning Man festival, a weeklong art event held every year since 1990 in the Black Rock Desert (Northern Nevada, California). Managed since 1997 by the business enterprise Black Rock City LLC, it would have never been possible without the previous existence of some underground art groups, such as The Suicide Club and The Cacophony Society (Brian Doherty, 2004). [3]

The Suicide Club and The Cacophony Society had deep roots in surrealist art practices, creating a unique way to live the city of San Francisco, promoting and organizing pranks, interventions, games and collective performances thorough the end of 1970s and the 1980s. The top-secret San Francisco Suicide Club, heavily influenced by Surrealism and Dadaism was started by five people: among them, Gary Warne. Warne gave concrete form to the concept of synaesthesia in the San Francisco public space, ‘to create experiences that would be like living out a fantasy or living out a film’. [4] As an example, the surreal experience of climbing the Golden Gate Bridge in the fog with a group of people, or getting naked on San Francisco cable cars. In 1986, The Cacophony Society, formed by members of the Suicide Club, followed in their path. It developed through street theatre, urban explorations and pranks in public places, such as the Santarchy Event, which became like a virus that replicates itself (V. Vale, 2006) and which is still celebrated every December on the streets all over the world involving tens of thousands of Santas.

John Law defined the Cacophony Society’s activity as Surreal Tourism, which ‘helped you look at wherever you were in a completely different way, almost like a William Burroughs cut-up’ (John Law, 2006). Another of the Cacophony’s central concept was the trip to the Zone, or the idea of “Zone Trips”, inspired by the Temporary Autonomous Zone by Hakim Bey (1985). The Zone Trip #4 in 1990 organized by John Law and Michael Mikel, described as A Bad Day at Black Rock, signed the beginning of the annual Burning Man festival, previously a beach party held at Baker Beach since 1986. The origin of Burning Man is therefore deeply connected with surrealist art experiments and the early San Francisco urban counterculture.

Today Burning Man is held every year in Black Rock City, a temporary city built up for just one week at the end of August in the playa of the Nevada Desert. It is a community experiment, where the people involved create huge art sculptures, music events, happenings and performances, and which dissolves without leaving traces after a wooden sculpture of a Man, together with the art installations and the other venues, are burned by its inhabitants. The managers of Black Rock City LLC, a company that organizes and administrates the annual Festival since 1997, progressively transformed Burning Man into a networking enterprise. Burning Man might be seen as a collective social network, a virtual city with specific rules and economy, based on the concept of sharing goods and experiences. There is no money to use in the playa, and the people survive sharing their food. But as John Law points out in a private interview with the author (San Francisco, 2009), Burning Man is very different today from what it was before. It is a networking enterprise, with 50.000 participants every summer paying around 200 dollars to be part of it, and with a precise structure: it is a centrally organized chaos, where the Man, which is burned at the end of the festival, is raised at the centre-top of the city. It is situated at the centre of the playa and it looks at the people from the top (see image below). The participants themselves do not raise it all together anymore as it happened in the early times at Baker Beach, and it looks clear that Burning Man is not a non profit gathering anymore. 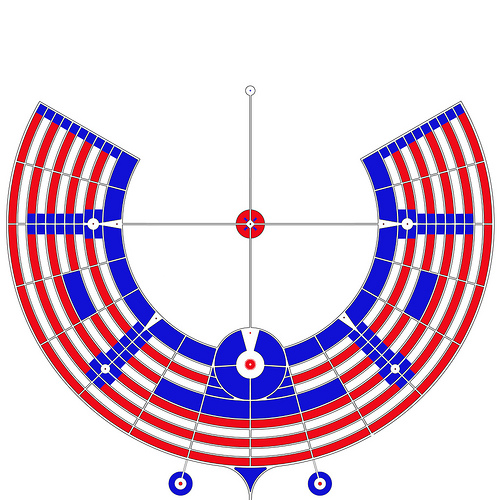 The evolution of Burning Man from a counterculture experimental art gathering to a centralized event organized by a business enterprise could be compared with the transformation of social networking, from networked art to Web 2.0. Social networking platforms such as Facebook, MySpace, Twitter, etc., have established themselves among Internet users, representing a successful model of connecting people. But at the same time, they mirror a very centralized way of creating networking. Fred Turner, in his paper “Burning Man at Google” (2009), explores how Burning Man’s bohemian ethos supports new forms of production emerging in Silicon Valley and especially at Google. ‘It shows how elements of the Burning Man world – including the building of a socio-technical commons, participation in project-based artistic labor, and the fusion of social and professional interaction – help shape and legitimate the collaborative manufacturing processes driving the growth of Google and other firms’ [5]. In 2006, for example, Black Rock City LLC began the developing of Burning Man Earth in collaboration with Google, which is not surprising, considering that Google’s cofounders, Larry Page and Sergey Brin, are burners since the early days. In 1999 the founders famously shut down the company for a week during Burning Man.
This dialectic between counterculture and networking enterprises shows once again that the art of networking today is strictly connected with the use of commercial platforms and therefore is changing the meaning of collaboration and art itself. Is it today still possible to speak about “counterculture”, when social networking has become the motto of the Web 2.0 business?

The Disruptive Art of Business

Accepting that the digital utopias of the 1980s and 1990s have never been completely extraneous to the business practices, might be an invitation for artists, networkers and hackers to subvert the false idea of ‘real’ counterculture, and to start analyzing how the cyclic business trends work, and what they culturally represent. Analyzing how the networking culture became functional to accelerate capitalism, as it happened for the youth movement of the 1960s, might change the point of view and the area of criticism. The statement ‘if you can’t beat ’em, absorb ’em’ could be reversed from the artists and hackers themselves. If artists, hackers and activists can’t avoid to indirectly serve corporate revolutions, they should work on absorbing the business ideology to their own advantage, and consequently, transforming it and hacking it. A possible tendency might be not just refusing business, but appropriating its philosophy once again, making it functional for our purposes.

Even if it is easy to recognize co-optation as a cyclic business strategy among networkers, hackers and activists, it takes more effort to accept that business has often been part of counterculture and cultural development. In this phase of ambiguity, it is fundamental to look back to analyze the reasons of the shift of networking paradigms and counterculture values, but it is also necessary to break some cultural taboos. Artists should try to work like viruses to stretch the limits of business enterprises, and hack the meaning of business itself. Instead of refusing to compromise with commercial platforms, they should try to put their hands on them, to reveal hidden mechanisms of social inclusion and exclusion, and to develop a critique of the medium itself.
To conclude, I would like to mention the famous statement at the end of Walter Benjamin’s Artwork Essay, which dialectically juxtaposes Ästhetisierung der Politik – Politisierung der Kunst. [6] Art, to become effective, has to understand how the mechanisms of fascination – and in our case, capitalism – work, to respond with a critical approach through the media, which need to be once again transformed into a tool of intervention.

One Comment on “Aesthetics of Common Participation and Networking Enterprises”