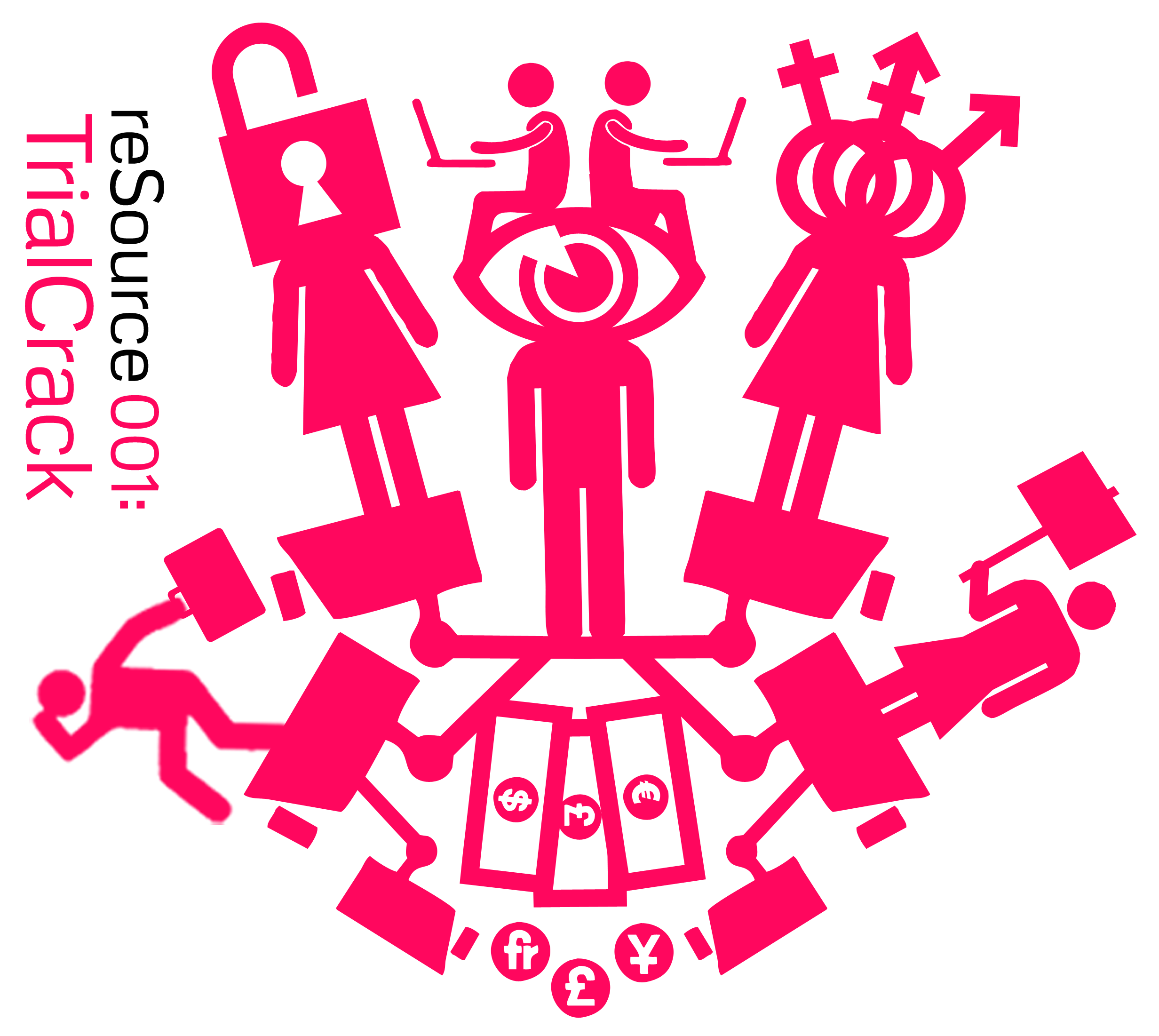 The reSource transmedial culture berlin comes back after the transmediale festival with a two day programme under the name of “Trial Crack“, scheduled on May 11-12. On May 11 a collective discussion on logic of artistic production with cultural producers based in Berlin (15:00-19:00). On May 12 three different but conceptually linked discussions: Sustainable Disruption (13:00-14:50); Post Privacy (15:30-17:00) and Queer Shifts (17:30-19:00).
www.transmediale.de/content/resource-event-001-trial-crack
May 11, 2012

May 11, 15:00-19:00 @ General Public
The first day of “Trial Crack” proposes a collective discussion on networking methodologies of curating and distributed logic of artistic production with cultural producers based in Berlin. What is the responsibility and the role of cultural institutions engaging with art and digital technologies, towards a critical articulation of culture production? We aim to discuss and share our current reflections and share with the rest of participants ideas on how to build a stronger connection between local – and translocal – agents in the fields of critical media, art and hacktivism in the city. The discussion is introduced by: Tatiana Bazzichelli and Kristoffer Gansing (transmediale), Stéphane Bauer (Kunstraum Kreuzberg /Bethanien), Oliver Baurhenn, Jan Rohlf, Remco Schuurbiers (CTM/Disk), Clemens Apprich and Oliver Lerone Schultz (Post-Media Lab, Leuphana University of Lüneburg), who will open up the discussion to the audience. Confirmed participants are: Reboot.fm, Weise 7, C-Base, Supermarkt, ArtLaboratoryBerlin, Artconnect Berlin, Citizen Kino, Leap Gallery, Liebig12, Skulpturen Park, Visual Berlin, Florian Wüst (Haben und Brauchen), Krystian Woznicki (Berliner Gazette), Panke, Ausland, AV Node Festival, Gegen, Daz, Free Museum, Share Festival, Coded Cultures, re:publica, a.o.

In Berlin, hacker, activist and artistic practices are very much realised outside the realm of artistic institutions. Some of those practices are contributing to transform the economy and the cultural asset of the city, but they are also becoming easy targets to be exploited by the market. Starting from the assumption that the increasing commercialisation of the contexts of sharing and participation is currently transforming the meaning of art and cultural production in Berlin, on May 12 from 13:00 to 19:00, artists, hackers, and gender-situated communities are involved in three different but conceptually linked discussions: Sustainable Disruption (13:00-14:50); Post Privacy (15:30-17:00) and Queer Shifts (17:30-19:00).

Sustainable Disruption, 13.00-14.50 @ General Public:
This discussion follows the thread initiated by the “reSource market” thematic programme at transmediale 2K+12 (www.transmediale.de/content/resource-markets), which reflected on the status of capitalism in a time of crisis, proposing both critical, playful and sustainable alternatives by intervening directly within economical and political systems.
In Part 1 (13.00-13.50): Rasa Smite (LV) and Philip Horst (DE) reflect on strategies of sustainability and art production at the interface of urban research and renewable networks, highlighting artistic investigations on migration and integration, economics and ecology.
In Part 2 (14.00-14.50): Alexander Müller (DE) and Georgios Papadopoulos (GR) reflect on network strategies of creating disruption among political and economical systems. The scope is to open up a critical perspective, intervening directly on symbols of economic value, national identity and political power.
Moderated by Clemens Apprich and Oliver Lerone Schultz.

Post Privacy, 15.30-17.00 @ General Public:
This discussion follows the thread initiated by the “reSource network” thematic programme at transmediale 2K+12 (http://www.transmediale.de/content/resource-networks), which reflected on power structures, pervasive control and surveillance by corporations and centralised systems, and their possible subversion through subjective empowerment. This discussion reflects on the problematic of openness towards data protection, as a consequence of the contemporary economy of user-generated contents. Through the presence of “tante”/ Jürgen Geuter and “mspro”/Michael Seeman, it highlights the perspective of the recently emerged social sub-movement of the “datenschutzkritische Spackeria”/”the privacy criticizing Spackeria” (http://the-gay-bar.com/2012/02/22/the-datenschutzkritische-spackeria), which is proposing a different attitude on privacy matters and transforming the meaning of openness and transparency. Julian Oliver and Danja Vasiliev of the artistic group Weise 7, present their recent Weise7 archive book, giving instead an artistic perspective on the issue of openness.
With: tante (“Jürgen Geuter”) /Die datenschutzkritische Spackeria; Michael Seeman aka @mspro /ctrl-verlust.net; Julian Oliver and Danja Vasiliev /Weise 7.
Moderated by Gregor Sedlag /C-Base and Tatiana Bazzichelli.

In the words of Francesco Macarone Palmieri aka WARBEAR:

“How much is time the production of your own space? Where is the shifting point between time and space in terms of self-representation? How is queer theory a ‘shifting’ practice as an act of psychical nomadism in Berlin cultural production?  Berlin is a Rosetta stone mediated by the information market platform; a gigantic social network of faces and pages where its actualisations take different cultural production forms. In this spread, queer culture had different microwaves producing circular expansions of oligopolistic markets. In the last ten years we assisted to fragmented mirrors of queer shiftings; divergent convergences of micro-scenes appearing and disappearing in a dis/connecting rhizome. In this surface, cultural actors shifts and slides in/to micro-management strategies and fluctuating languages. In the background, the social network of Berlin produces itself as the Master plan which uses its cultural production technologies  – the queer one within – as resources for its gentrification processes in a bigger and fluid dialogue with the socio-political forces. The discussion will focus on the position that promotions and individuals as projects are taking into this vectorial skyline. The narration will focus on the public adventures in the space-time travel of identity deconstruction, not just in the tumbling down of the heteronormative sex-sexuality-gender axiom but as a spontaneous theory that enters into the a-critical use of the ‘community’ concept, the role of the new world migrants as shifters/shiftees and the description of a market identities’ crystallisation”.
With: Lena Braun (DE) / Gallery Su de Coucou; Walter Crasshole /Exberliner; Danilo Rosato (IT) and Antonella Pintus aka Anna Bolena (IT) /Homopatik.
Moderated by Francesco “Warbear” Macarone Palmieri.

Partner event: May 12 @ Supermarkt
SUPERMARKT, creative resource centre in Berlin-Wedding, is celebrating its Grand Opening on May 12. Starting from 5pm until late, SUPERMARKT invites you for music, drinks, artworks and many other delights.
Twitter: @super_markt
http://www.supermarkt-berlin.net

Read more about the event: www.transmediale.de/content/resource-event-001-trial-crack

The reSource is the new year-round initiative of transmediale festival, in partnership with CTM/DISK, Kunstraum Kreuzberg /Bethanien and the Post-Media Lab (Leuphana University of Lueneburg). The reSource is a project of networking, a work in progress based on the inter-connection of genres & practices, which aims to create occasions of sharing and reflections by bringing together communities and individuals who work critically with art, technology, politics and identity. The reSource programme is curated by Tatiana Bazzichelli (transmediale festival).