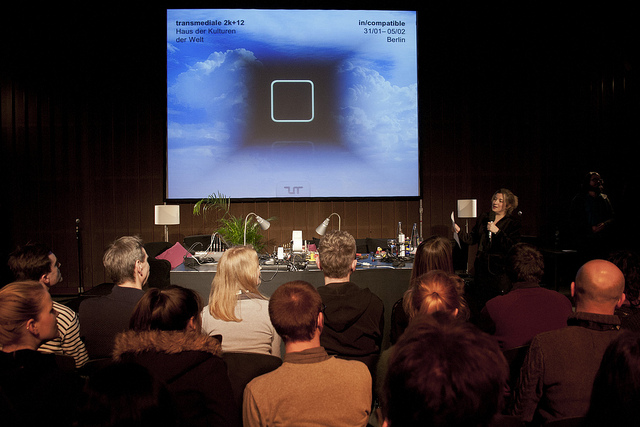 The reSource of transmediale culture (www.transmediale.de/resource) is a new initiative of transmediale festival that happens throughout the year in the city of Berlin, developing ongoing activities with decisive touchdowns at each festival. It is curated by Tatiana Bazzichelli, and works in collaboration with CTM/DISK, Kunstraum Kreuzberg /Bethanien and the Post-Media Lab of the Leuphana University Lüneburg, the three main institutional partners of the project.

Realisation of the Programme
Coherently with the concept and methodology of developing reflection and exchange all year round, the programme of the reSource of transmedial culture started already in November 2011 co-organising an initiative at the Berlin University of the Arts. It was followed by the intense programme during transmediale festival, and later, it will go on producing some distributed initiatives which will lead to transmediale 2013.

The event on 16-18 November 2011 was organised in collaboration with the Digital Aesthetics Research Centre of Aarhus University (Denmark) and the Vilém Flusser Archive at the Berlin University of the Arts. It took the name of In/compatible Research PhD workshop and conference, involving 18 PhD students coming from various countries who answered to a public call for contributions spread some months before. Together with them, a group of international researchers (for a total of 25 participants) reflected on the theme in/compatible producing theoretical and practical outcomes that converged into a thematic publication distributed during the festival.

Through a collaborative ‘peer-review’ process including the In/compatible Research PhD workshop and conference, the thematic transmediale 2012 publication took the form of a research newspaper: “World of the News”, in/compatible research newspaper, reversing the title of the famous and controversial “News of the Words” newspaper – the British Sunday tabloid owned by News Corporation – therefore advocating a reflection on non economically or power driven methodologies of research and knowledge dissemination. As an attempt to bring a research agenda into an art festival, this newspaper broke with some of the current academic conventions of peer-review and academic reputation. Unlike education in many countries, the newspaper was free, providing an insight into research from academics, practitioners, and PhD students working with in/compatibility.

At transmediale 2012, the results of such peer-to-peer process were expressed in the one-day event named In/compatible research practices (10.30-16.00, K1), where all the PhD students that participated at the conference in November reflected on practice-based methodologies of research proposing a series of presentations and a plenary session, followed by the formal Newspaper launch in the evening. The plenary session was moderated by Robert Jackson, Andrew Prior, Magda Tyzlik-Carver, while the Newspaper launch by Christian Ulrik Andersen, Geoff Cox and Morten Breinbjerg.

The rest of the reSource Methods programme presented both a constellation of events related to the activities of researcher and cultural producers (i.e. the panel CODED CULTURES – Subcuratorship beyond Media Arts, Thursday February 2, 16:00-18:00 in K1, with Mic Wlodkowski, Georg Russegger, Luise Reitstätter, Joasia Krysa, Sidney Ogidon, and Eva Fischer), and a series of workshops and interventions developing experimental methodologies of artistic practice based on the reflection on the in/compatible (i.e. Floppy films Workshop – Moving Images on 1.44 MB by Florian Cramer, with guest tutor Dagie Brundert, on February 1-3 from 11.00-17.00; and the In/compatible material intervention by Martin Howse, Anthony Iles, Mattin, Jonathan Kemp, and Shu Lea Cheang on Wednesday February1 from 12.00-18.00).

In particular, part of the PhD student presentation programme was the performance Steam Machine Music by Morten Riis, which was also executed during the opening night of transmediale, assembling and playing his homebuilt mechanical instrument made mostly from vintage Meccano parts.

The reSource Activism thematic stream included the open conversation Videomakers Unite! on video art and net culture, media collectives and counter publics conceived and moderated by Florian Wüst with Kathy Rae Huffman, Eckart Lottman, and Pit Schultz (Thursday February 2, 11:00-14:00, K1) and the workshop: Activism Beyond the Interface: The Sandbox Project conceived and hosted by Roberta Buiani and Alessandra Renzi with Nicola Angrisano and many others, with the aim to rethink the composition of online and off-line platforms for collaboration, and their economic, aesthetic and ethical expressions (February 2, 10.30-16.30, Café Stage).

The reSource Network programme was realised through the panel discussion Isolation and Empowerment after Web 2.0 moderated by Geoff Cox, which was divided in two parts: “Trapped and Tracked” with Aymeric Mansoux and Johannes P. Osterhoff and “Mobilizing the Unrepresentable” with Salvatrice Settis /Anna Adamolo and Victoria Estok, that analysed the topology and the effects of artistic and hacktivist practices both off-line and online, reflecting on power structures, networking methodologies as well as on the tension between increasing connectivity and virtualisation of social relationships (Friday February 3, 11.00-14.00, K1). reSource Networks included also the workshop Fluid Nexus by Nicholas Knouf (Friday February 3, 11:00-14:00, K2), based on historical and contemporary experiments in analog and digital network construction and the R15N & Technologies of Miscommunication workshop/discussion on the projects by Dmytri Kleiner, Baruch Gottlieb + Telekommunisten Network (Friday February 3, 15:00-18:00, K2). R15N was initially presented in the context of the reSource during the opening night of the festival, since the project functioned as the official miscommunication platform for transmediale 2012. R15N was an artwork in the form of an experimental phone service created with the scope to generate community engagement and communication. Unlike group emails or typical social networks, where communication happens all at once, R15N worked through the unpredictable co-operation of a heterogeneous community, therefore becoming an ongoing networking platform for the whole festival itself. Finally, reSource Networks included the Paperduino-Uno – a PaperPCB Workshop by Wolfgang Spahn, where participants learned how to create and modify paper printed circuit boards (Sunday, 12.00-16.00, K2).

reSource Markets was developed mainly through the panel Crashed Economy: Debugging and Rebooting which included two sections moderated by Elanor Colleoni: “What Capitalism?” with Steve Lambert and Daniel Garcia Andujar; and “Hacking Finance, Rethinking Trade” with Jaromil, Kate Rich and Shintaro Miyazaki (Friday February 3, K1, 15.00-18.15). The panel questioned the notion of capitalism through direct intervention and collective reflections, and proposed an exodus from proprietary money and trade regulation through distributed commons and practices of social networking. In the workshop programme, the reSource Market thematic component was expressed by the Google – One Week Piece Workshop by Johannes P Osterhoff, where he shared knowledge and results acquired during his Google – One Year Performance Piece. In the Google Performance Piece he documented all searches he performed with the search engine for an entire year making his everyday life publicly available on the Internet: during transmediale, the artist repeated the experience with a selected group of participants, developing a specific artistic project before and during the festival.

Finally, the reSource Sex programme, taking place on Saturday February 5 in K1 and K2, presented the panel Sexuality of Machines with Karla Grundick and Julianne Pierce, moderated by Gabriella Coleman (11.00-12.30, K1), an investigation on the aesthetic and practice of DIY porn from the 90s until today; and the panel Commercialising Eros, with Jacob Appelbaum, Zach Blas, Liad Hussein Kantorowicz, and Aliya Rakhmetova, moderated by Gaia Novati, which shed light on the interferences and tensions between sex and business, analyzing practices and strategies of technology entrepreneurship and networking models, online sexual imagery and queer virality (13.30-15.30, K1). The latter included also the performance “Watch Me Work” by Liad Hussein Kantorowicz and Kate Erhardt, as a simultaneous practice-based exploration in the everyday life of sexworking, which seek to de-exotify sex work, opting for a realistic perspective, and investigated the discrepancy between the hyped discussion about sex work as compared to the actual sex work experience. The reSource sex thematic day ended with the presentation Porn, Patriotism and Paranoia on the Chinese Internet by Katrien Jacobs moderated by Francesco Macarone Palmieri aka WARBEAR, offering a fascinating glimpse into the unique tactics and flavours of Chinese pornography and its associated subcultures (14.30-18.00. K1). The same day, the Bio-Game Workshop by Shu Lea Cheang and Martin Hug took place in K2 (11.00-14.00): it constituted a public engaged development session of UKI viral game focusing on the study and experiments in human (E)motion sensing using GSR sensors.

Sunday, the final day of the reSource programme at transmediale, focused on the launch of the reSource ongoing platform after the festival. To express through artistic practices the distributed and decentralised component of the reSource, the Sunday event took the form of a networking game. Hosted by Mark Butler, the event Zombie Play in the Ludic Salon: reSourcing an Exquisite Media Corpse (K1, 13.00-17.00), included a series of local and translocal projects from artists, hackers and activists who participated in the reSource programme during transmediale or that answered previously to the reSource statement of interest spread online some weeks before the festival start. Different projects from the reSource were brought into a playful dialogue with each other through aleatoric, agonal and just plain ludicrous methods. The presentation of the reSource concept and the dialogue between the reSource institutional partners took place at the following event Beyond in/compatible (Auditorium, 17.30-18.30) reflecting on methodologies of cultural production and networking strategies in the city of Berlin and the broader context of netculture, introducing the subsequent reSource projects after the festival.

To follow up in the investigation on how collaborative practices among communities of artists, activists and hackers contribute in shaping new courses of action, tools and contents within (and beyond) digital culture production, the programme of the reSource after the festival will be oriented towards the creation of distributed contexts of sharing, exchange and visibility for local and translocal communities. Next events will be held at General Public (May 11-12) and at Kunstraum Kreuzberg /Bethanien (August 22-24), where the reSource for transmedial culture will aim to generate an accessible and dynamic forum for both the media art scene as well as for cultural researchers in the city of Berlin and abroad.