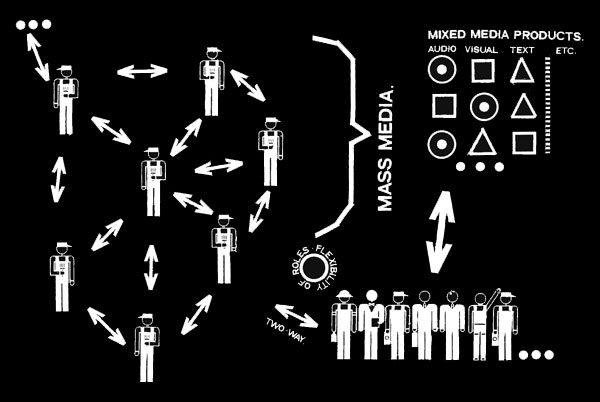 Image: Vittore Baroni, "Real Corrispondence 6", 1981 (part of a series of homonym flyers). The diagram was later re-edited in the postcard "The Evolution of Art", published by Ragged Edge Press in 1990.

The transmediale (Festival for Art and Digital Culture of Berlin, Germany) website has been updated, with information about the new festival structure, the new transmediale direction and team, dates of the festival, call for works and description of ongoing projects. The next festival will take place from January 31st until February 5th, and the theme for the 2012 edition is: In/Compatible.

Since September 1st, 2011, I will be taking part of the transmediale team in Berlin running a new experimental project named Resource for Transmedial Culture, a networking and curating initiative that extends into ongoing, year-round activity with touchdowns at each festival. The resource works towards the creation of a project of distributed networks and a knowledge production laboratory of art and research within transmediale.

As a combination of networking, research and curating, the resource is a new framework for festival related projects that happen throughout the year. Through the resource Transmediale aims at giving something back to local and translocal community as well to create a dynamic feedback to the festival content. Through a separate call later in the year, a number of projects will be selected to be co-hosted by the resource, with events during 2012 and a presence at the 2013 festival.

The launch of the resource will take place in Febraury 2012 and will in itself be an important feature of the Transmediale 25th anniversary, looking into the future while acknowledging the importance of the festival as an accessible and dynamic forum for the translocal media art scene as well as for interdisciplinary cultural producers and researchers.