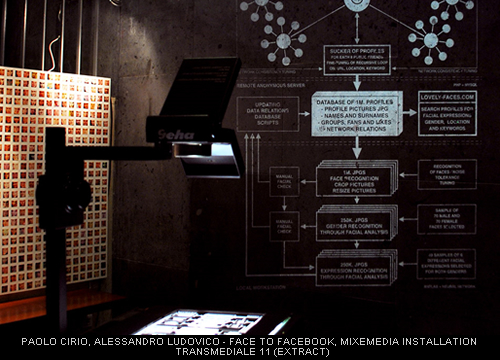 In the essay The author as a producer (1934), Walter Benjamin describes the author’s role through the figure of the engineer. Instead of reproducing the production apparatuses, the author/engineer is able to intervene within them, transforming the cultural production function itself and opening it up to the collective intervention.
The engineer figure described by Walter Benjamin reminds the “tactical” art by Paolo Cirio, who contributes to transform the meaning of the artistic practice from within, by unveiling the unsolved knots in the art field. Through his artworks, Paolo Cirio (http://www.paolocirio.net) intervenes tactically locating some plugs of a puzzle which can be finished only by directly involving its referents, being them either corporations, media apparatuses, or the so-called network “users”.

His artworks, some of which were created together with Alessandro Ludovico and Ubermorgen.com (GWEI, Google Will Eat Itself e Amazon Noir), some others were created individually (such as Drowning NYC, The Big Plot e Open Society Structures), redefine the author’s and art’s role, which becomes a premise to think over social and political dynamics. By manipulating the media and the news media, as he himself claims, his work “often pushes the boundaries of the representation, going beyond the use of a single media and focusing on the information environment created by the data flow.” His artworks deal with the language, the narrations, the creation of conspiracy plots, but also with the meaning of power, democracy, privacy and control. Not always without provoking contraddictions and controversies. But it is just through this dynamic of the imperfect and the unknown – once they are started, artworks are opened to possible developments and interpretations – that it is possible to experiment how the information and media flows build their meaning.

This interview, starting from the description of the meaning of tactics and strategies applied to the artistic practice, and wondering about some concepts such as “the media robbery”, ends thinking over some sensible knots revealed by the last projects: Face to Facebook, created with Alessandro Ludovico and launched at the last Transmediale 2011, and P2P Gift Credit Card protagonist of an action in London on March 25th, in which the “revolutionary” credit cards have been distributed in strategic places.

Both projects, exhibited at a solo show, REALITYFLOWHACKED, which opened in Ljubljana on April 26th at the Aksioma Project Space, become an incentive through which analyzing the intersections between art and market, the contradictions and paradoxes of neoliberal capitalism, the artist’s role itself and, at the same time, the one of the user.

In the social media era, the relational dynamics and the information data flow become more and more part of the production processes, not often validating the utopian perspective assumed by Walter Benjamin in 1934. That is why it becomes central to reflect on such processes, imagining possible alternatives, provoking critical contradictions and producing new visions and experiences.