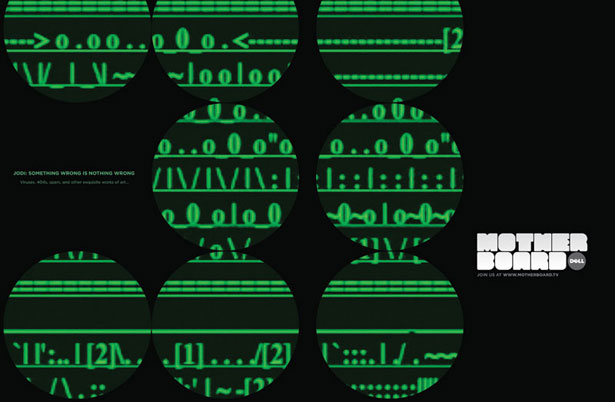 "JODI: Something Wrong is Nothing Wrong", Ad by Motherboard TV (DELL)

The above image, published in VICE magazine Vol 7 Nr 2 (2010), is an advertisement for the social networking platform Motherboard TV, sponsored by DELL. But people into digital culture would immediately recognize something else.
The advertisement shows a reconstruction of the homepage http://wwwwww.jodi.org, a work by the Dutch artists JODI.org, a very well known symbol of the early net.art. JODI were part of a recent show at Eyebeam gallery in New York (December 2009) and got interviewed by the team of Motherboard TV (see here).
But this advertisement, branded by DELL, might also be the symbol of something more. What were once the values and philosophy of the hacker ethic are since some years the domain of many of the business companies which represent the development of “Web 2.0” and contributed to create the notion of social media. I have analyzed this matter on an article which is going to be published on the next issue of the Arnolfini journal, ‘Concept Store’ (Bristol, UK) .

The ideas of sharing, openness, decentralization, free access to computers and the hand-on imperative of the hackers’ imaginary, today are strictly connected with the use of commercial platforms. We are facing a progressive commercialization of contexts of software development and sharing, which want to appear open and progressive (very emblematic is the motto “Don’t be evil” by Google), but which are indeed transforming the meaning of communities and networking, and the battle for information rights, placing it into the boundaries of marketplace.This process is changing the meaning of collaboration and art itself.

In the last half of the twentieth century Avant-garde art practices from Fluxus to mail art have promised the creation of collaborative art and the production of new models of sharing knowledge. Today, social networking platforms such as Facebook, YouTube, MySpace, Twitter and Second Life have established themselves among Internet users, representing a successful model of connecting people, an a successful business strategy. But these networking platforms have their roots in a series of experimental activities in the field of art and technology started in the last half of the twentieth century which  transformed the conception of art as object into art as a network of relationships, possibilities of collectively intervening in the creation of an artistic product.

For example, the figure of the artist as a creator of sharing platforms and of contexts for exchanging is part of a background of artistic and technological experimentation from Fluxus and mail art to hacktivism and net.art; collective identities and multiple singularity projects have direct references on the Luther Blissett Project and the Neoist network-web conspiracy (as I wrote on my previous book Networking, 2006). Today, techniques of networking developed in grassroots communities have inspired the structure of Web 2.0 platforms and have been used as a model to expand the markets of business enterprises. The principal success of a Web 2.0 company or a networking enterprise comes from the ability of enabling communities, providing shared communication tools and folksonomies.

Is it today still possible to speak about “counterculture”, when social networking has become the motto of the Web 2.0 business? Digital economy and artistic subversive practices look fully interconnected. It should not surprise that Motherboard TV choose the work of JODI to represent its corporate image, writing on it: “JODI: Something Wrong is Nothing Wrong. Viruses, 404s, spam, and other exquisite works of art”. The marketing is demonstrating to have learned the lesson very well: “language is a virus from outer space”, wrote William S. Burroughs.

The act of responding with a radical opposition does not look like an effective practice anymore. Artists should probably answer becoming cultural viruses themselves, generating cultural Trojan Horses – or better, social hacks – adopting the strategy of disruptive business as a model of artistic creation. The understanding of how network business works might show the way. Creative intersections between business and art become an important territory for the re-invention and rewriting of symbolic and expressive codes. A possible field of intervention  to create artistic, cultural and political experiences, using the unexpected, and a deep level of irony and social criticism.