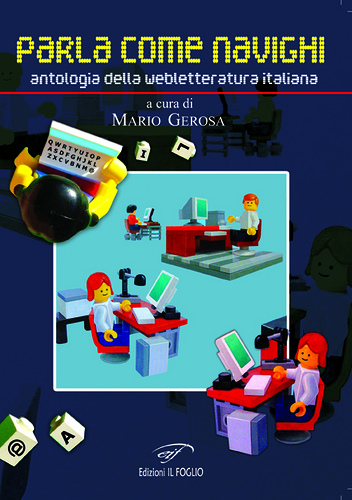 Parla come navighi. Antologia della webletteratura italiana (Anthology of Italian Webliterature) is published. I wrote the preface, with the title: ‘Per una letteratura della partecipazione’ (‘Towards a Participatory Literature’).

The Anthology is a collections of writings, poetry, essays, and reflections on the new forms of experimental  literature in the era of social media. Published by Il Foglio Letterario, is edited by Mario Gerosa, with editing assistance by Roberta Peveri.
The title might be literally translated into ‘speak the way you surf’, even it makes not so much sense in English. The idea comes from ‘parla come mangi’ (speak the way you eat), the Italian common way to say ‘be simple’, ‘don’t try to be rhetoric’, or better, ‘don’t overdo when you speak’. Basically, the Anthology wants to present the microcosm of the Italian web- and network-literature, and the consequent experimental effort in creating new languages and new forms of writing by the social media users. The focus is therefore not just to use social media as a inexpressive communication tool, but to transform them into a platform of creation.

As we read in the introduction by Mario Gerosa, the digital revolution has changed the way we express our identity. Today we can get an idea of people based on how they communicate on the Internet. Once said ‘speak the way you eat’, now, to understand the other, you look at the way you write on the Web. With the advent of Web 2.0 new languages are blooming and new forms of expression came to life, both designed by professionals as amateurs, all of them sharing the same enthusiasm for the new instruments of communication. Twitter in hendecasyllables and Facebook status are the starting point for existential implications; chats in Second Life tell you about complex virtual relationships; feuilleton weblogs, experimental novels to read on the screen are some of the new expressions that form the galaxy of the Italian webilterature. A new trend, yet to be discovered and analyzed, which reconciles opposites, and next to the Neo-avantguardes which Internet advocates, show the dear, old, good poetry, re-enacted in the virtual domains. This Anthology offers a first taste of this new literature, a first result of the Web 2.0 communication phenomenon, an invitation to get to know a rich and unexplored territory from virtual worlds to social networks.

Last Friday, on April 9, 2010, I presented the topics of this Anthology at the the Department of Language, Literature & Culture, Italian culture (http://italiensk.au.dk) of Aarhus University,  together with the ones of my book Networking. La rete come arte | The Net as Artwork, published in Italian in December 2006 by Costa & Nolan (Milan) and in English by DARC, the Digital Aesthetics Research Center of Aarhus, 2009 – with the Preface by Derrick de Kerckhove. Starting from the idea of networking (which we found in the concept of participatory literacy, as well) I investigated the development of net art, hacker art and digital culture in Italy. The seminar presented some Italian artistic and activist projects and ended with the analysis of the new forms of experimentation in social media.

If you are interested, this is the link to buy the Italian Anthology of Webliterature.

← Is Something Wrong Nothing Wrong?
Aesthetic Eruptions of the Digital →