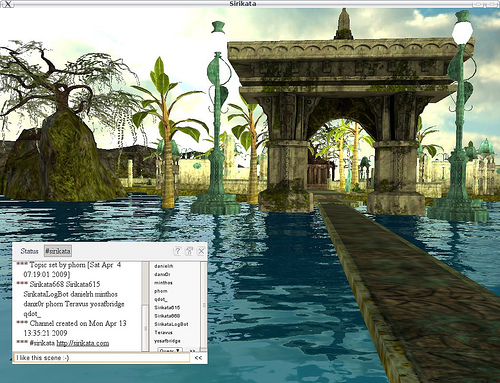 Sirikata (www.sirikata.com) is a BSD licensed open source platform for games and virtual worlds. The platform has grown out of a several years of research at Stanford University, initiated by Media X, and the current ambition is to expand into a fully community run open source project. At the Stanford Humanities Lab we have built practical projects that explores potential futures of collaboration, cultural institutions and musical performance. Bennetsen will demonstrate and discuss this work in context of new technological possibilities offered by Sirikata.

In his role as associate director of the Stanford Humanities Lab Henrik Bennetsen maintains a strong interest in 3D collaborative spaces and open source technology. He is heading the Speed Limits research project, a collaboration with the Danish Bornholm’s Kunstmuseum on how 3D collaborative technologies may augment traditional cultural institutions. As part of this, he is deeply involved in the development of the open source Sirkata platform for the deployment of games and virtual worlds. Previously Henrik lead the Lifesquared research project that explored animating traditional archives using new technology. In 2007 he co-founded the Stanford Open Source Lab that has since grown to about 60 members from across the Stanford community. Henrik is Danish and has a MSc. In Media Technology and games from the IT University of Copenhagen and a BSc. in Medialogy from Aalborg University. Before his return to the world of academia Henrik was a professional musician and still has a strong side interest in creative self expression augmented by technology.

← Report: Meeting on Hackerspaces with Jake Appelbaum
Kick-off night for the new Hackerspace in Aarhus! →