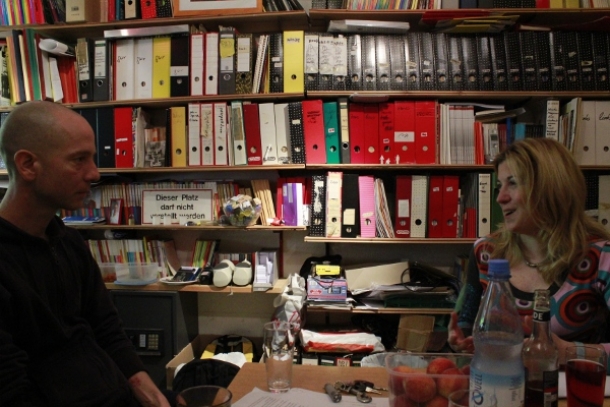 The initiative Networking Berlin’s transmedial culture started in spring 2012 as part of Tatiana Bazzichelli’s Postdoc research project on networking communities developed as a joint collaboration between the Centre for Digital Culture / Leuphana University of Lüneburg, and transmediale festival. After transmediale 2k+12 in/compatible, she started investigating the perception on the newborn reSource project, and the transmediale festival in general, by various cultural producers, artists and curators based in Berlin. The aim was to document considerations and thoughts of people active within the scene of cultural production in the city, and the implications of their activity in the framework of culture politics and networking models.

The hybrid character of this first research phase – which obviously does not aim to be representative of the whole independent art and cultural landscape of the city – is not only at the core of her research methodology, but also of the activities of many of the people interviewed. They do not work on a single language of expression, but they try to combine different ones. Their cultural programmes are not only about a specific field or a specific genre; they work by converging interdisciplinary fluxes – artistic, mediatic, political, economical, and bodily.

These dialogues highlight strengths and weaknesses of what could be defined as the condition of “being in between” in the cultural landscape of Berlin, the hybrid character of activities that are mixing media, practices and languages, which often result in lack of political and cultural recognition and lack of sustainable funds. Furthermore, they offer an interesting perspective in the activity of networking art and digital culture in the field of independent cultural production.

The interviews published in this section present a dialogic form, therefore often following a very spontaneous style. A creative montage of them, the reSource Chats, is published in the first issue of the transmediale/magazine, and launched during the event reSource 006 at Kunstraum Kreuzberg / Bethanien on Thursday 12 September 2013.

Special thanks go to Lina Zuppke for the editing and transcription of the interviews, and to Georgia Nicolau, Heiko Stubenrauch and Daniela Silvestrin for taking part in the documentation of this project, as well as working on the interviews’ transcription.