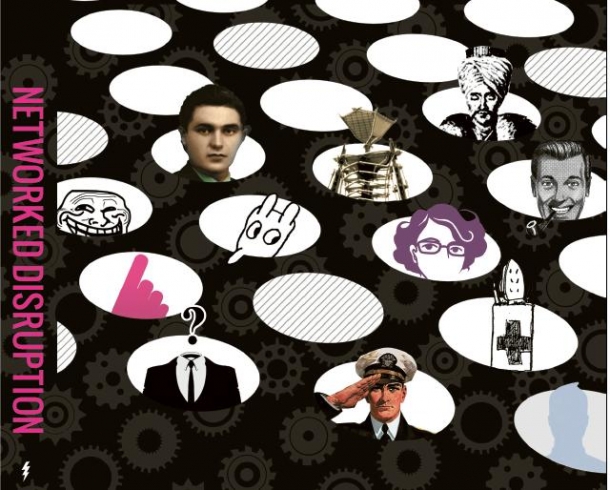 The event reSource 004: Networked Disruption (part of the series of event by the reSource transmedial culture berlin) reflects on how the current techno-economic paradigm of Web 2.0 has challenged notions of art and hacktivism. Named after the just-published book by Tatiana Bazzichelli Networked Disruption: Rethinking Oppositions in Art, Hacktivism and the Business of Social Networking (DARC Press, 2013), the event discusses new strategies of political and social criticism, by reflecting on mutual interferences between art, hacktivism and business disruption.

Hackers, activists, artists, practitioners and theoreticians are invited to reflect with us on the current development of artistic and hacker practices in the context of social networking. How can hackers and artists be critical in the business context of social media? Is the business of social media co-opting DIY culture? Is criticism only possible through opposition? These are some of the questions we will share with the public during the panel.

By proposing the concept of disruptive business as an art practice, reSource 004: Networked Disruption becomes an opportunity to imagine new possible routes of social and political action. The event presents a constellation of social networking projects that challenge the notion of power and hegemony, from the earlier development of network culture to today.

We will reflect on the meaning of disruption today by connecting practices of networked art and hacking in California and Europe, such as mail art, Neoism, The Church of the SubGenius, Luther Blissett, Anonymous, Anna Adamolo, Les Liens Invisibles, the Telekommunisten collective, The San Francisco Suicide Club, The Cacophony Society, the early Burning Man Festival, the NoiseBridge hackerspace, and many others.

After the book presentation and discussion, the dj/vj/xj Podinski (XLterrestrials + CiTiZEN KiNO) will mix a culture jammer’s “smorgasbord” of counterculture beats and hijacked eyecandy from the 90s and up to various post-9/11 situations. Expect un-soothing audio-visual chaos!

← Networked Disruption: The Book
The Medium of Treason →