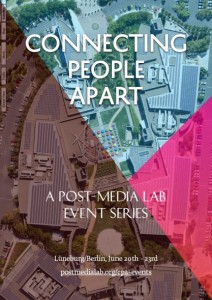 Whether you want to have something to do with the ‘community industry’ or not, it has something to do with you. Through its burgeoning expansion, our forms of relating, caring, communicating and collaborating, are being transformed, enclosed, templated and put to work. The most affective components of network culture are rapidly being engineered into ‘product’. Just as virtual space is augmented, real space becomes ever more virtualised, securitised and impoverished. The rise of the network-assembled community has coincided with a radical disinvestment of national and municipal communities in the age of austerity. As services are withdrawn, the ‘community’ itself is enjoined to step into the breach. ‘Community’, in the era of networked neoliberalism, has become both a target of governance as well as of business.

Beyond the commercial drive which is ‘connecting people apart’, communities of difference are also flourishing in the post-internet age. Reimagining community is not just the preserve of belligerent nationalisms and Web 2.0 but also a long-standing activity of alternative, artistic and political cultures’ responses to commercialisation and industrialisation, from the 17th century puritans and diggers, the artist communes of the 19th century, through to the political squatter scenes of post-68 generation, the hacklabs of the past years and new movements such as Anonymous. The Community Complex will ask how normative forms of sociality and identification are not only produced but also challenged in today’s mashup of the virtual and real, free and waged labour, computational and affectual, real-time and bio-time, as well as minor and molar imaginings of connection. To achieve this we bring together different perspectives and experiences of critically engaging with the new realities of mediatised ‘community’ and its reimagination.