Interface: A Journal For and About Social Movements

Volume two, issue two is out!

Voices of dissent: activists’ engagements in the creation of alternative, autonomous, radical and independent media 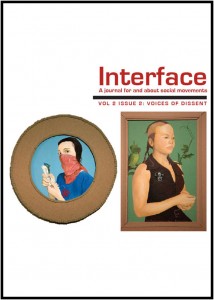 Volume two, issue two of Interface, a peer-reviewed e-journal produced and refereed by social movement practitioners and engaged movement researchers, is now out, on the special theme “Voices of dissent: activists’ engagements in the creation of alternative, autonomous, radical and independent media”.

Interface is open-access (free), global and programmatically multilingual. Our overall aim is to “learn from each other’s struggles”: to develop a dialogue between practitioners and researchers, but also between different social movements, intellectual traditions and national contexts.
http://interfacejournal.nuim.ie

This issue of Interface includes 26 pieces in 4 languages by authors from Austria, Brazil, Canada, Denmark, Germany, Hungary, Ireland, Italy, Latvia, the Netherlands, Palestine, Russia, South Korea, Sweden, the UK and the US, including:

Other articles:
Philippe Lucas, Patient-centred strategies to counter stigma, oppression and forced incarceration in the CSX and medical cannabis movements
•    William K Carroll, Crisis, movements, counter-hegemony: in search of the new
•    Raphael Schlembach, Towards a critique of anti-German “communism”

A special section is devoted to alternative international labour communications, with contributions from Peter Waterman, Eric Lee and Dave Hollis
Key documents: Chto Delat? A declaration on politics, knowledge and art (Russian and English versions)
Response by Peter Waterman to Colin Barker’s piece on Solidarnosc in issue 2/1, and response from Barker to Waterman

The website has full details on how to submit articles for this issue.
Volume 3, issue 2 on “Repression and social movements” is due to be published in May 2011.

Interface is always looking for translators to help with our multilingual project and website editors who can help with WordPress. We are also looking for activists or academics interested in helping out, particularly but not only with our African, South Asian, Spanish-speaking Latin American, East and Central European, and Oceania / SE Asian groups. More details on our website.