AHAcktitude: Hackers and Artivists in Milan 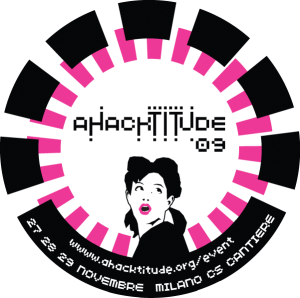 The community of aha@lists.ecn.org, the Italian mailing list on art and hacktivism is organizing a 3 day event in Milan at the Cantiere Social Centre. They called it AHAcktitude, as a collective development of the AHA: Activism-Hacking-Artivism project which I founded in 2001. I will contribute via Skype from San Francisco with a presentation on the topics I am researching during my visiting scholarship at Stanford University (starting August 2009).
The name of my presentation is: From Silicon Valley with Love, and it will connect art, tech and grassroots projects in the Bay Area (Saturday November 28, 9.30pm).

Here is the AHAcktitude press announcement:

In Milan on the 27, 28, and 29th of November the artivists of the AHA mailing list will meet at the “Il Cantiere” social centre.
Activist-artists, artistic hackers, social-artistic activists, call them  whatever you like. The 600 subscribers to the AHA mailing list are just a small part of all those people who, in Italy and in the world, know that the medium is not just the message, but the massage and the ‘mixage’. They know that it is not enough to complain about TV (be it mainstream, communitarian or niche), or blabber on about alternative communication, because the experience must be developed, and because communication without bodies only communicates stereotypes, and the body without intelligence only produces manipulation.

For this reason from last year the subscribers of aha@list.ecn.org meet face to face periodically, each time in a different city, to open the black boxes, to get their hands inside the technological devices for communication and imagination, to deconstruct the official knowledge and share new knowledge, to work at collective intelligence of bodies and not at capital intelligence, to broaden the resistance to globalization of multinationals.

AHAcktitude will be three days of activity and activism, of enjoyment and sharing, of study and fun. Technology, music, Internet, literature, telecommunications, marketing and social networks: everything will be targeted at open sourcing and open sharing. Methods, approaches, attitudes that are different but that communicate in order to explore, understand, and act in our condition of technologically modified beings.
Because human beings are worth more than merchandise, and we will not be satisfied while the life of someone who has more is worth more than the life of someone who has nothing.

aha@lists.ecn.org is an Italian mailing list created in 2002 within the AHA: Activism-Hacking-Artivism project, founded by Tatiana Bazzichelli,
aka T_Bazz. AHA wants to promote networking and critical thinking, connecting artistic practices to political and social activism. We define these practices as artivism.

← Has Facebook superseded Nettime?
On Hackerspaces and Anonymity Networks →