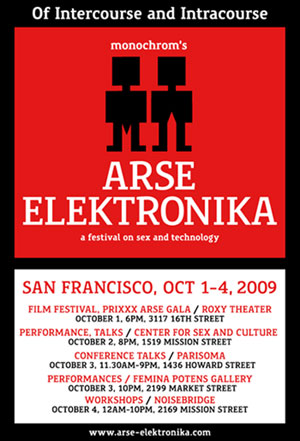 October is coming in San Francisco, and together with the breezy fog, we have a new occasion to re-fresh our minds: Arse Elektronika 2009, October 1-4, San Francisco.
This year sex and technology meet the future at Arse Elektronika, as reported in the LA Times.
The Arse Elektronika Festival, which is not the one about media art organized in Linz every year – even if it sounds the same :) – also comes from Austria: founded by the experimental art group monochrom and managed by Johannes Grenzfurthner it is at its third edition (the first was in 2007).

CUM2CUT, the Indie-Porn-Short-Film Festival which I founded (together with Gaia Novati) in Berlin in 2006, is among the Festival partners. Some CUM2CUT movies will be shown at the Prixxx Arse Elektronika on October 1 at 6 PM, at the Roxie Theater in San Francisco’s Mission district.

Beside this, I will be involved in the festival program, taking part in the final panel,  Of Hypercrotch and Nanobot, together with Rose White, Violet Blue, Saul Albert, Eleanor Saitta and Johannes Grenzfurthner: Saturday, October 3, 8 PM @ PariSoMa

Here is the official press release. Spread the word!

With talks, machines and performances by Allen Stein, R. U. Sirius, Noah Weinstein, Randy Sarafan, Uncle Abdul, Jonathon Keats, Ani Niow, Jason Scott, Annalee Newitz, Rainer Prohaska, Douglas Spink, Tatiana Bazzichelli, Violet Blue, Eleanor Saitta, Reesa Brown, Saul Albert, Monika Kribusz, Kim De Vries, Pepper Mint, Micha Cárdenas, Rose White, Elle Mehrmand and many more…
+++++++++++++
+++++++++++++
Scottish SF author Iain Banks created a fictitious group-civilisation called ‘Culture’ in his eponymous narrative. The vast majority of humanoid people in the ‘Culture’ are born with greatly altered glands housed within their central nervous systems, who secrete – on command – mood- and sensory-appreciationaltering compounds into the person’s bloodstream. Additionally many inhabitants have subtly altered reproductive organs – and control over the associated nerves – to enhance sexual pleasure. Ovulation is at will in the female, and a fetus up to a certain stage may be re-absorbed, aborted, or held at a static point in its development; again, as willed. Also, a viral change from one sex into the other, is possible. And there is a convention that each person should give birth to one child in their lives. It may sound strange, but Banks states that a society in which it is so easy to change sex will rapidly find out if it is treating one gender better than the other. Pressure for change within society would presumably build up until some form of sexual equality and hence numerical parity will be established. Does this set-up sound too futuristic? Too utopian? Too bizarre?

We may not forget that mankind is a sexual and tool-using species. And that’s why our annual conference Arse Elektronika deals with sex, technology and the future. As bio-hacking, sexually enhanced bodies, genetic utopias and plethora of gender have long been the focus of literature, science fiction and, increasingly, pornography, this year will see us explore the possibilities that fictional and authentic bodies have to offer. Our world is already way more bizarre than our ancestors could have ever imagined. But it may not be bizarre enough.

“Bizarre enough for what?” — you might ask. Bizarre enough to subvert the heterosexist matrix that is underlying our world and that we should hack and overcome for some quite pressing reasons within the next century.
Don’t you think, replicants?